RSS
← How my week-end went
Today was card game day →

The most recent stand-alone novels by Mrs Nora Roberts, which came out a month ago, but I was waiting for my library copy, so I only read it this week-end. 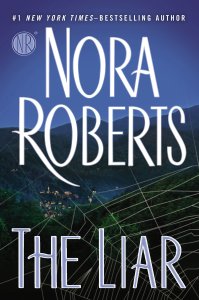 A brief resume: Shelby Pomeroy married Richard Foxworth at age 19. Five years later, she becomes a widow, and immediately later learns that her husband lied about everything: he cheated on her, he pretended to want a second child with her but had a vasectomy in secret, he never even made the first payment on their new seven-bedrooms house. She’s left with nothing but her toddler and three million dollars of debt; so she returns home to her family. She reconnects with her old friends, and some old enemies too, and she catches the eye of newcomer Griffin Lott. But moving away doesn’t mean getting away from the trouble her husband left her into. On top of all the other things, the man was a thief and a con artist, and from old victims to former partners, there are way too many people looking to settle a score with him, through Shelby.

What did I think of this book? I liked it, for the most part, and I did finish it in less then 24 hours. When one considers that there are books I cannot even bring myself to finish, I think this is a fair indication that I really did like this book.

Beware spoilers under the cut.

I especially love the first three chapters; they show that even at what my be her lowest point, Shelby is a resourceful, practical woman. Seeing her dig herself out of a three million dollars debt by herself, one slow step at a time, shows a kind of strength that I don’t often see pictured in fiction, and that I really appreciated. I had some issues with a few interactions between Shelby and her family and friends, moments I felt were forcibly inserted and resolved within a dozen pages or so, for the sake of creating cheap dramatic tension, but overall the characters had nice, slow and steady developments, by themselves and in their relationships with each other. However, this novel fell for one of the classic blunder. I don’t mean getting involved in a land war in Asia, or going against a Sicilian when death is on the line. I mean a classic literary blunder: going for the predictable ending.

Spoilery spoiler time! The villain of the novel is the man who is first introduced to the reader as Richard Foxworth, the supposedly dead husband of the heroine, Shelby. (I’m using that convoluted phrasing because, as we learn, it’s probably not his real name. Not only that, we never learn what is real name actually is.) He appears, alive and well and ready to be the callous, violent, shallow and soulless villain of the least interesting type on page 471 of 501.

The lack of depth and interest of the villain is bad enough (in fact, it’s another classic literary blunder), but it’s not my main issue with the ending. My main issue is that I saw this coming since page 125, when Shelby recounts the tale of how she heard of he husband’s death; his boat was found after a bad storm with a few items, a shoe and a windbreaker, but no body. Someone quicker then I am might have caught the hint on page 26, when Shelby says, about her husband “They don’t issue a death certificate when they can’t find …”

Everybody who has any sort of contact with any kind of popular culture knows: NO BODY = THE PERSON IS NOT DEAD!!! If that’s the angle you’re going to play, and obviously in this case it is, you don’t make it the big, last second act dramatic reveal out of it. Especially not when the first hint is given 445 pages before the big reveal. It’s much too obvious! Even my less dramatic gap of 376 pages is far too long; I kept waiting for the characters to catch up with me and they never did. I don’t like to think that reasonably well-written characters of a novel I’m enjoying are morons, it spoils the fun. But what choice did I have in this case?

Still, I read the book in less them 24 hours. But I’m not buying it right away, if at all. I’ll at least wait until the paperback comes out, make up my mind then.

Posted by aureliaosborne on May 19, 2015 in Uncategorized

← How my week-end went
Today was card game day →