Extra post to inform the world that next weekend, I will attend Limestone Genre Expo in Kingston with my publishers, Renaissance Press. I won’t be in any of the panels, but I may attend a few, and I will definitely spend some time manning the sales table. I went last year, and really enjoyed myself. I look forward to fun times with fun people.

Posted by aureliaosborne on May 28, 2017 in Uncategorized

The Montreal sibling (I’m gonna have to find them a new name soon: they are only part-time Montreal resident now, and seem to be moving back in the region for good, but anyway) asked me to take that little lady for a while. She lives in the refuge where the sib volunteers, and isn’t doing too well. I took her in for a more quiet place in case it was a stress thing. Doesn’t look like it is, though. Poor baby. She’s on an antibiotic course which should clear everything up, thank goodness. 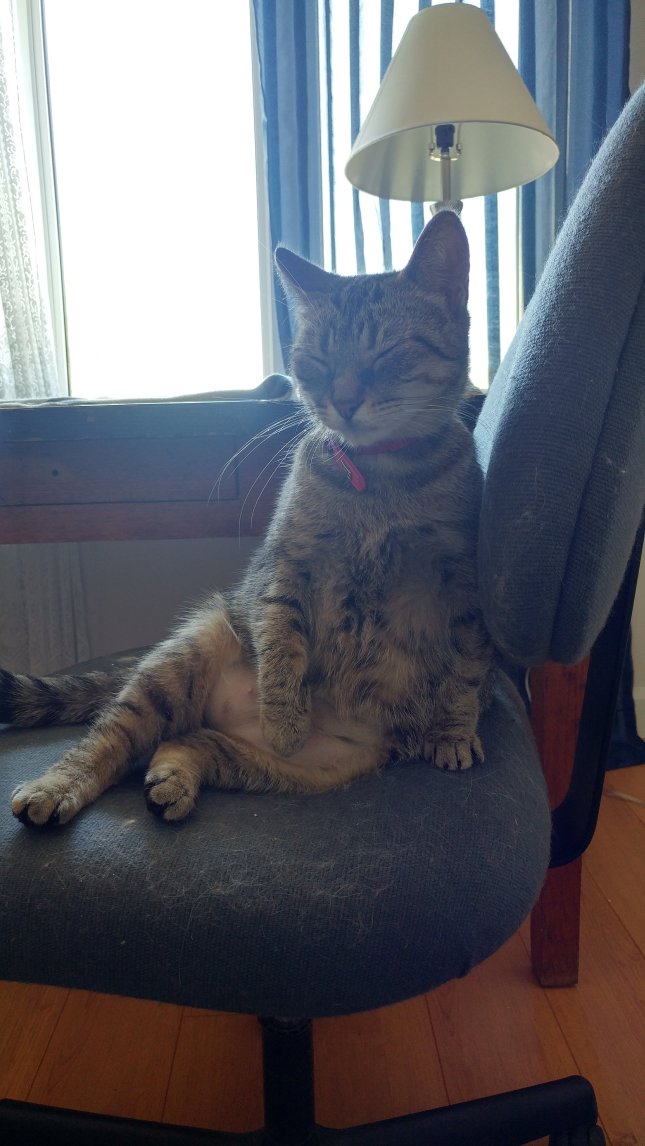 ​Her name is Tit’fille (Lil’girl). She is really small and very sweet. I’d like to keep her for my own (also to rename her) but that will depend on Rosie. They have to at least be able to live together, even better if they get along. Since we can’t introduce them until the lil’one gets better, it’s a waiting game.

Posted by aureliaosborne on May 21, 2017 in Uncategorized

I haven’t posted anything last week, because I wasn’t quite sure what to write. It’s been a weird couple of weeks. A fortnight of strong contrasts between myself and the vast majority of people around me. For myself, I had an unexpected influx of money at the beginning of the month. Not quitting-my-job money, not even paying-my-house money, but the kind to put a smile on my face. And while that was happening, the worst flood we’ve seen in 40 years hit my hometown. It’s also really bad elsewhere in the province, but I don’t know about what records may or may not have been broken there.

I don’t know how I feel about this. On the one hand, it would be disingenuous to say that the first two weeks of May haven’t been good weeks for me, on the other hand, looking at pictures and videos and listening to people’s stories makes it impossible to call those two weeks anything but bad. It feels so much worse because I know very well how safe I am. It would take an apocalyptic event to bring any flood to my house, and we’re not quite there yet.

The best thing I could think to do was donate some of my unexpected gains to the Canadian Red Cross. It feels like a grain of sand in the desert (the ‘drop in the ocean’ analogy would be poor taste here) but also like the best thing to do. The Red Cross has experience, knowledge and resources; they know what to do, and if I can help them a little, it’s better than nothing.

Should anybody else want to make a donation, for the Quebec relief or for one of the other Canadian Red Cross funds, here is a link to do it.

Posted by aureliaosborne on May 14, 2017 in Uncategorized