Book Tuesday: At the Water’s Edge, by Sara Gruen 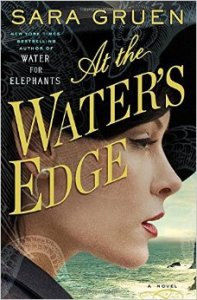 (boy, it’s been a while since I made one of those!)

In 1942, three Philadelphia socialites make their way to a remote Scottish village, with the intention of proving the existence of the Loch Ness monster once and for all. Maddie Hyde, the wife of Ellis Hyde, accompanies Ellis and his best friend Hank on their quest mostly out of a sense of obligation, and is quickly left behind while the two men are gone, sometime for days at a time. She befriends the locals who work at the inn where they have taken rooms, and she learns a lot about herself, and about the true nature of monsters.

A lot of the publicity strategy for this book was to emphasize the connection with Water for Elephants, which makes sense. Water for Elephant has been adapted into a successful movie. (It made enough money to earn back it’s production costs and it got enough good reviews to earn a “Fresh” rating on Rotten Tomatoes, so that is successful to me.) There is also some comparison to be made between the two stories: they are both historical novel, set in the early part of the 20th century, and they both focus on the personal growth of their respective main characters. Of course, I may be missing some other similarity or subtle references: it has been four years since I read Water for Elephants. And this review is about At the Water’s Edge, anyway.

END_OF_DOCUMENT_TOKEN_TO_BE_REPLACED

Posted by aureliaosborne on August 4, 2015 in Uncategorized