This one will be quick,  because it is very late.  I spent this afternoon and evening playing games with my friends, including this one. This is a new purchase of mine, played with for the first time today, and I love it. 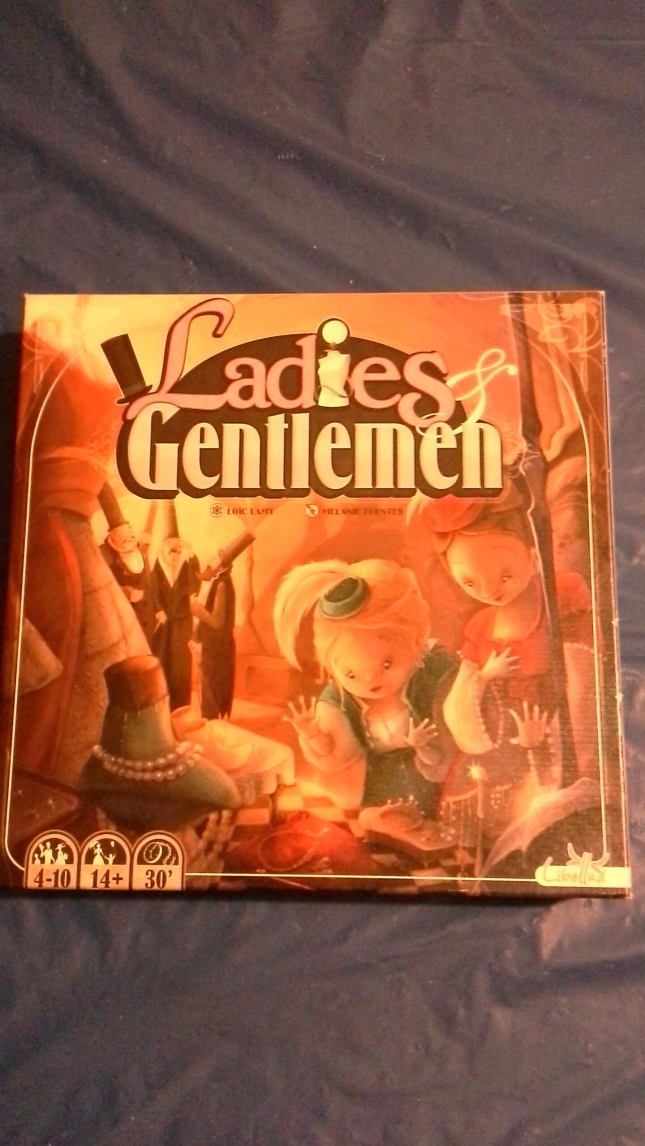 That, right there,  says a lot about my personality.

Have a good week!

Posted by aureliaosborne on July 12, 2015 in Uncategorized

Tags: anything goes Sunday, board games

This week, I feel like I accomplished more. I got a really good chunk of prep work done on the writing project that’s been eating my brain for the past couple of months, I translated the rules of A Match Made in Austen so that we could launch a French version simultaneously with the English one, I read a whole novel, I did some work on the “alpha” version of this board game I want to create, and I found a really cute jeweled lamp for my office, on sale at 12 bucks to boot.

I also spent Canada Day watching a bunch of dvds I’d been meaning to watch for a while, and I spent most of Saturday at a double birthday party for a friend and the child she happened to give birth to on her own birthday (there were two parties, a kid one in the afternoon and a dinner one at an all-you-can-eat sushi place in the evening) and I watched the Queen’s Plate this evening. All those years watching the Stater triple crown, and I never watched the Canadian one until now; I can’t believe it either.

So I feel much better then I did last week, all in all. I was productive, which I prefer being when I can possibly help it. And the time I spent not working or creating, I spent doing stuff that I really enjoy. I hope the following week keeps the same pattern.

Posted by aureliaosborne on July 5, 2015 in Uncategorized

Tags: A Match Made in Austen, anything goes Sunday, board games, horseback racing, writing

Where was I this week?

I was reorganizing my office, and the bookshelf in my living room. It was a good opportunity to go through my books and my games spring-cleaning style. You know: keep, donate, trash. I’m keeping all the books, but I did set aside two of my old games to donate, and one to trash (read: take all the pieces apart to re-paint and re-use in some other game of my own creation).

I’m not going to post pictures of the final results, because a) it’s not completely final (I still need a desk lamp) and b) I don’t think it looks that impressive to anyone who isn’t me. However, I’m pretty happy with the result. The best part is that I’ve got plenty of space to work, and plenty of space on the shelves to buy more books, and more games. Yay!

I’ve also bee sleeping a lot. I think it’s my mechanism for coping with the heat. And if that’s the case, I’m going to need a new strategy soon. Don’t get me wrong, I love sleeping, but I do have a lot of things to do during the day, including working for eight hours, and if the heat gets much worse, I’m going to run out of sleeping time to compensate. I wish it was socially acceptable for me to spend my afternoon break at work taking a nap. Or that I was brave enough to try anyway.

In the meantime, I think my next grocery trip will include some water bottles that I can freeze and carry around with me, and plenty of fruits. Any other tricks for dealing with the heat?

Posted by aureliaosborne on June 21, 2015 in Uncategorized

Things that happened during the hiatus: I rediscovered board games 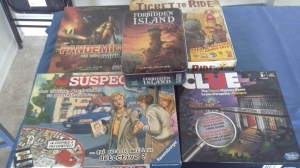 The thing is this: I really enjoy playing board game, but most of them are two players or more, and for a long time, it was really hard finding people to play with. My friends and family are either super-busy, or they don’t like playing board games. Playing was a special occasions thing: for example; my mother and I bought each other Tickets to Ride on Christmas a couple of years ago, and we’ve been playing after Christmas dinner every year since, and that was pretty much it.

But then, last Christmas, I saw that there were a copies of Pandemic at my local big box bookstore. I heard a lot of good things about that game, so I grabbed a couple of copies* to give out as presents, hoping that I would then be invited to play the game with the people I gave the game to. And it worked! One of the people I gave a copy to was my mom, and we’ve played almost every week-end since Christmas. And then this really cool game shop opened a block away from my apartment, just last month. I stumbled upon it the other day, and I am so happy! I dragged my mom to the grand opening, and we had a really good time.

My favorite part about playing games is the solving of the puzzle. There is a thing that you have to do, and using your brain to logically deduce how to do the thing is what, in my opinion, makes the game fun. The element of luck is what makes it possible to play the game more then once and still have fun. When I was first playing game, I didn’t think much about how the game works, I just played it. Now that I’m rediscovering them as a critically-minded adult, I am spending a lot of time thinking about them games; and how they work, or don’t, and how to make then better if I can.

These reflections lead to many ideas, the first of which is now well on it’s way to become a physical thing. To help make the transition from theoretical to concrete as smooth as possible, Renaissance as launched a Kickstarter campaign, which will last until June 17th. Check it out here.

If you are in the Ottawa region, and you want to try a physical version of the game, someone who looks a lot like me will be conducting a playtest at CanGames, a local convention of gamers. You can check out the CanGames website here. The playtest is scheduled for Sunday, at 2 PM.

And that pretty much catches everyone up on what happened during the hiatus. Next week, I’ll be talking about my CanGames experience, and then, who knows?

*along with plenty of books, because I took a bookstore vow.

Posted by aureliaosborne on May 10, 2015 in Uncategorized